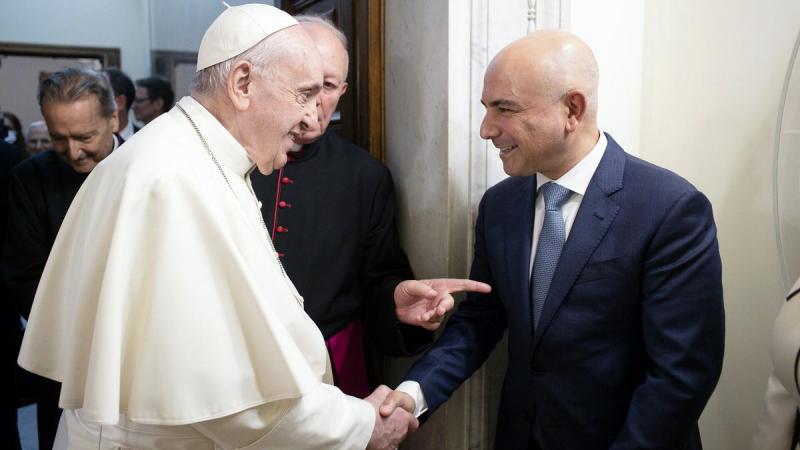 Physician, film producer, human rights advocate, and entrepreneur Eric Esrailian of Los Angeles recently received the Benementi medal, the highest civilian honor conferred by Pope Francis. The pontifical award recognizes Dr. Esrailian for his humanitarian work and service to the Christian faith locally and around the world.
This rare distinction as the first Armenian to receive such an honor from the Roman Catholic Church reflects Dr. Esrailian’s extraordinary service not only to Armenians around the world but also his leadership in raising awareness about human rights abuses and working to secure U.S. government recognition of the Armenian Genocide. The Promise Institute for Human Rights and The Promise Armenian Institute at UCLA were founded by Dr. Esrailian after the release of the feature film, The Promise, which he produced.
Esrailian sits on multiple nonprofit boards related to the healthcare, human rights, education, and arts and culture arenas, including the Central Board of AGBU, which he joined in 2016.
AGBU President Berge Setrakian spoke in glowing terms about Dr. Esrailian, describing him as an “unstoppable force” in the humanitarian space. “There is something about Dr. Esrailian that attracts good will in all the circles he travels. His affable nature belies his fierce tenacity and dedication to causes close to his heart. He continues to astound us with his flair for connecting people and ideas, generating support for various initiatives among influential figures. His portfolio of high honors keeps growing by the year and we can only watch with expectancy to see what he will do next to uplift humanity in meaningful ways. We are fortunate to have him in our leadership as we navigate through these times of crisis and uncertainty—especially in the Armenian homeland.
-   Press release
Read 2599
Read more >