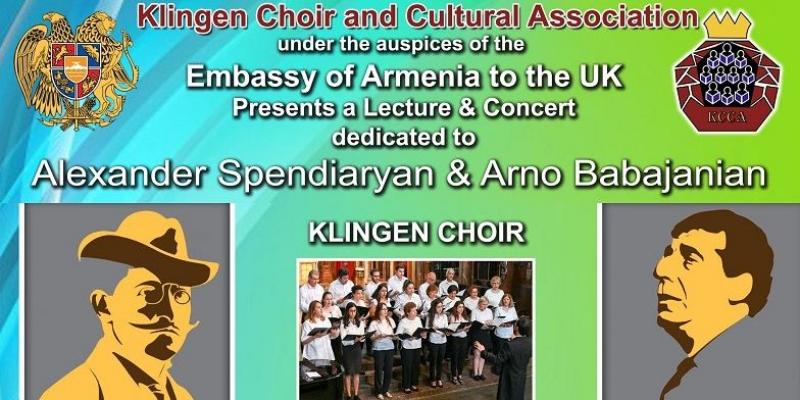 Concert-lecture dedicated to the anniversaries of Alexander Spendiaryan and Arno Babajanyan in London.
On 27 November a lecture and a concert dedicated to the 150th anniversary of Alexander Spendiaryan and the 100th  anniversary of Arno Babajanyan organised by Klingen Choir and Cultural Association and maestro Sipan Olah took place in St. Sarkis Armenian Church under the auspices of the Embassy of Armenia to the UK.
Director of Alexander Spendiaryan House-Museum Marine Otaryan presented Alexander Spendiaryan’s life and activity and the artistic director of Klingen Choir and the Klingen Chamber Orchestra Sipan Olah made a presentation of Arno Babajanyan’s life activity. Ա. The director of the Spendiaryan House-museum presented a Letter of appreciation to Sipan Olah for organizing and actively participating the Jubilee events dedicated to the great Armenian composer.
After the lecture, the composers' works were performed by Klingen Choir and the Klingen String Quartet under the direction of artistic director and conductor Sipan Olah. Soloists Sipan Olah (conductor, tenor & pianist) sopranos Tatevik Ashuryan and Hayarpi Yeghikyan, pianist Maria Palazian, oboist Jack Mouradian, violinists Paula Izabella Gorbaņova and Malena Benavent, violist Adrián Morena Tierraseca and cellist Chris Hedges performed immortal music by great composers.
The Ambassador of the Republic of Armenia to the United Kingdom Varuzhan Nersesyan addressed the audience with a welcoming speech, emphasizing the key role of culture in the development of relations between Armenia and the United Kingdom. Ambassador thanked the organizers and guests noting the importance of such events in presenting the rich Armenian musical culture and traditions to the people of the United Kingdom.
Among the attendees were the world famous conductor Vardan Melkonyan, who especially praised the professionalism of the musicians and lecturers, the primate of Armenian Church of UK and Ireland - His Grace Bishop Hovakim Manukian, clergy of the St. Sarkis Church, London - Reverend Father Shnorq Baghdasaryan, the British-Armenian Community Council Armand Abrahamyan, the stuff of the Armenian Embassy, guests from UK and other countries.
Let us remind you that the author of the project is the conductor, singer and pianist Sipan Olah, who already had realized this Jubilee program on October 16 in London and November 5-7 in Vienna with a great success. Maestro Olah's purpose is the promotion of the art of the Armenian composers in abroad as well.
-   Press release
Read 2642
Read more >