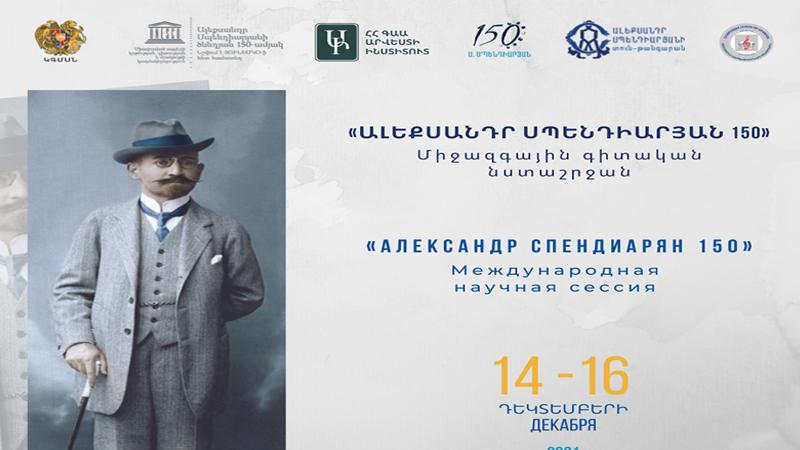 An international scientific session entitled “Alexander Spendiaryan 150” dedicated to the Jubilee of the great Armenian composer took place virtually on December 14-16, 2021. The organizers were the Institute of Arts NAS (National Academy of Sciences), Armenia; Spendiaryan House-museum and the Composers Union of Armenia.
40 participants from Republic of Armenia (Yerevan, Gyumri, Ejmiadzin), Republic of Artsakh (Stepanakert), Russian Federation (Moscow, Saint-Petersburg, Kazan, Yakutsk), Latvia, Sweden and Netherlands were involved in this international scientific session. Various reports dedicated to the way of life; creative heritage (different spheres, genres and peculiarities of his style from the viewpoint of past and 21st century) and conducting of Spendiaryan; relations with his contemporary cultural figures; his image in visual arts and sculpture; and the composer’s house-museum among the Armenia’s musical museums as well were represented during the session.
It should be mentioned that the participants were both academicians, the doctors and candidates of sciences in study of art, and the young researchers of the Spendiaryan's art as well. The coverage of the specialties also was large - musicologists and performers, cultural scientists, literary critics and philologists.
According to the decision of the academic council of the Institute of Arts NAS and with the support of the All Armenian Fund financing the Armenian studies of the National Academy of Sciences, the results of the scientific session will be published at the beginning of the 2022. The current state of the international Spendiaryanian studies will be expressed in this articles, which will become an important contribution in the academic Spendiaryanian studies.
-   Press release
Read 2739
Read more >