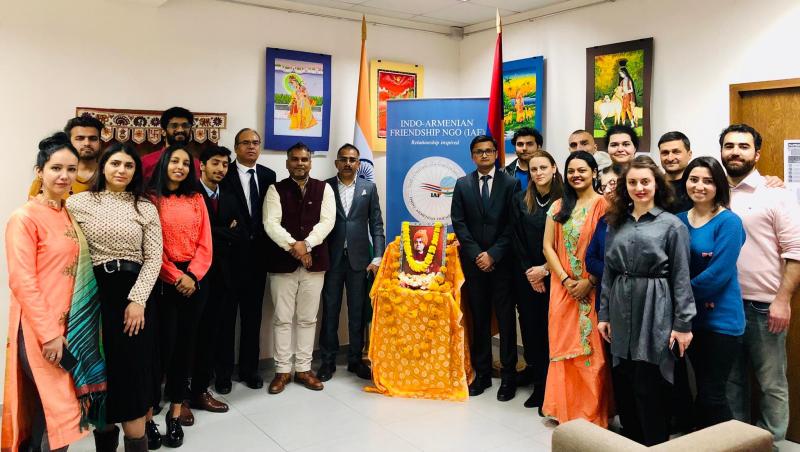 National Youth Day, also known as Vivekananda Jayanti, is celebrated in India on Swami Vivekananda's birthday, on January 12.
In 1984, the Government of India declared this day National Youth Day. Every year since 1985 the event is celebrated with great pomp.
Swami Vivekananda was an Indian humanist thinker, religious reformer, and public figure. At the end of the 19th century, he introduced Indian Vedanta and Yoga to the Western world. He was one of the key figures through whose efforts Hinduism gained the status of a world religion.
On January 12, the Indo-Armenian Friendship NGO, together with the Embassy of India in Armenia, celebrated National Youth Day at the Indian Cultural Center in Yerevan. The Ambassador of the Republic of India to the Republic of Armenia, His Excellency Kishan Dan Dewal, the Head of Chancellery (HOC) Mr. Tejas Pagar, and Mr. Ashok Bhatnagar, Attaché of the Embassy attended the event. Other guests present included Armenian-Indian students, as well as lovers of Indian culture.
A documentary film about the life and activities of Swami Vivekananda was shown and an active discussion was held on the Indian religious and philosophical systems. The Ambassador of India to Armenia Kishan Dan Dewal, and the Co-Founder and President of Indo-Armenia Friendship NGO Mr. Rananjay Anand spoke about Swami Vivekananda's teachings, touching upon ideas of patriotism, world brotherhood, and tolerance.
-   Press release
Read 2513
Read more >