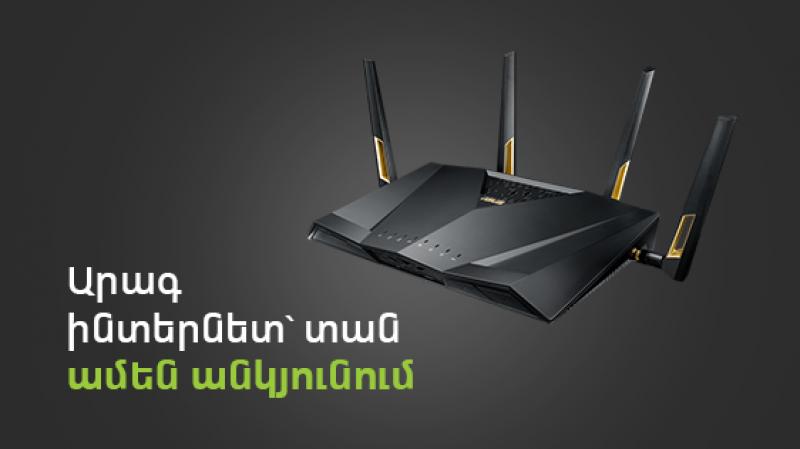 For several weeks now, Ucom has presented its new Unity tariffs, which combine fixed and mobile services. For the first time, the Company's subscribers will have the opportunity to benefit from a new generation Wi-Fi 6 device throughout Armenia, where Ucom's fixed network is available.
Unlike its predecessor and the most widely used Wi-Fi 4 devices on the market, Wi-Fi 6 provides 4 times faster bandwidth and up to 16 times higher speed, allowing Ucom subscribers to enjoy home internet at the speed of up to 400 Mbps/sec also via Wi-Fi.
“When joining any of our Unity tariffs, you will not only receive the latest Wi-Fi 6 device for free, but will also enjoy the fastest fixed internet in Armenia in every corner of your home”, said Ara Khachatryan, Director General at Ucom.
Wi-Fi 6 solves the problem of Wi-Fi conflicts (noise) that are common in the apartment buildings. And in big families, where each family member has at least one gadget or one of them is used to streaming games live on their gaming computer, the bandwidth of each device connected to Wi-Fi will be increased thanks to OFDMA (Orthogonal Frequency Division Multiple Access) technology. OFDMA divides the common channel into many small sub-channel cells, which means routers and gadgets on Wi-Fi 6 are able to process many users in parallel. For comparison, in Wi-Fi 4 works with OFDM, each channel at a certain point in time is allocated to only one user, so gadgets are forced to compete with each other for the channel, and connections occur almost randomly, because the network selects priority devices at random.
Wi-Fi 6 has received a new feature called Target Wake Time, which is designed to reduce energy consumption for network-connected gadgets. And it happens like this: Target Wake Time will allow to analyze each connected device and, if necessary, switch to sleep mode. As a result, energy consumption is reduced by up to 7 times.
Let us add, that the payment for all the services included in the Unity tariff is made via single bill, by simply recharging the Unity main phone number.
-   Press release
Read 2359
Read more >