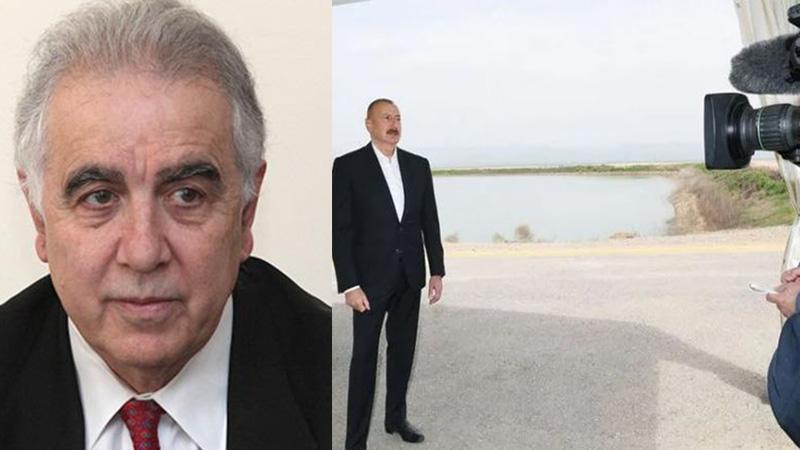 Last week, two Azeris arrogantly declared themselves to be the leaders of the fake “West Azerbaijan Goycha-Zangezur Republic,” which claimed to include Lake Sevan and the Syunik province of the Republic of Armenia. This announcement was made a few days after the barbaric attack on the eastern border of Armenia by Azerbaijan!
President of Azerbaijan, Ilham Aliyev, has frequently referred to large areas of the Republic of Armenia as part of Azerbaijan, giving them fake Azeri names. Here is what he said in September 2013: “Azerbaijan’s state flag should be waved in Shusha [Shushi], Khankendi [Stepanakert], and Azerbaijanis should live in their historical lands in the future. Our historical lands are Irevan [Yerevan] khanate, Goyce [Lake Sevan] and Zangezur regions. There will be times; we will live in these lands. I believe it, I am sure. Everyone should put their efforts in order to achieve it.” Furthermore, Aliyev stated in March 2015: “Azerbaijan will restore historical justice and reclaim not only the breakaway Nagorno Karabakh region and areas around it, which are currently held by Armenians, but also parts of present-day Armenia.” He boastfully envisaged that after “liberating Karabakh, we, Azerbaijanis, will return to our ancient lands -- Yerevan, Goyca [Lake Sevan], Zangezur [Armenia's Syunik region], etc. The younger generation must know that our lands are not limited to the current territories of independent Azerbaijan. We must go back to those lands as well and we will.”
If the President of Azerbaijan makes such outrageous statements, it is not surprising that other Azeris parrot his baseless claims.
Last week, two Azeris, Rizvan Talibov and Mehmet Ali Arslan, proclaimed themselves to be the “President and Vice President” of “West Azerbaijan Goycha-Zangezur Republic” and declared its independence, with its capital in Ghapan or Vardenis, Armenia.
These Azeris attended the inauguration of the first representative office of this fake Republic in Ankara, claiming that Turkey was the first country to recognize it. “President” Talibov declared that Turkey and “West Azerbaijan Goycha-Zangezur” are “one nation, two states.” He must have forgotten about the Republic of Azerbaijan which uses the same slogan.
Regrettably for the Azeris, their euphoria was short-lived. Eurasianet.org published an article on Sept. 22, titled, “The rise and fall of Azerbaijan’s ‘Goycha-Zangezur Republic.’” This “Republic” lasted for three days, even though Azerbaijan’s pro-government media initially publicized this fake news. Tural Ganjali, a member of Azerbaijan’s parliament had immediately endorsed the non-existent “Republic.” However, Ganjali deleted his Facebook post within hours and most Azeri websites removed all references to this “Republic.” The pro-government media discredited not only the “Republic” but also its equally fake “President” Talibov who had been appointing ministers and adopting decisions.
Azerbaijan’s news agency, APA, condemned Talibov, stating that he “actually has no scientific knowledge about or research on “Western Azerbaijan. He knows neither the history nor the geography of Western Azerbaijan. It is impossible to find a single serious person around him, and most of the people he named, appointed, and included in the structures do not even know about it. Talibov ‘appoints’ and gives ‘authority’ of the highest positions to anyone, regardless of their identity or political views in return for flattery or a meal or 5-10 manats [a few dollars].”
A member of Azerbaijan’s parliament Hikmat Babaoghlu wrote on Sept. 21: “The so-called ‘Goycha-Zangezur Republic’ is a political-ideological terror against Azerbaijan.” Babaoghlu continued: “Such a political hypocrite [Talibov] has no moral right neither to create the ‘Goycha-Zangezur Republic’ nor even to pronounce these holy names. Because this idea, while Azerbaijan is insisting on the issue of the Zangezur corridor, creates the impression that Azerbaijan does not intend to open a corridor in Zangezur, but to create a state there. This is a real provocation against the opening of the corridor.”
This is not the first time that such a lame-brained idea has been floated by someone in Azerbaijan, according to Eurasianet.org. “In 2020, an Azerbaijani academic in Turkey, Gafar Chahmagli, formed what he called the Republic of Western Azerbaijan (Irevan), which would have had an even larger territorial reach. That project (which also was called the Irevan Turkish Republic) was connected to another group with apparent government links, the West Azerbaijan Community (WAC), but it did not get the (brief) level of state endorsement as the Goycha-Zangezur Republic.”
Greatly disillusioned, “President” Talibov wrote on his Facebook page: “While we were expecting attacks from Armenians, some of ‘ourselves’ attacked us with an unseen aggression, full of slander!!”
All those Azeris who condemned Talibov and Arslan must not have realized that they were indirectly also condemning President Aliyev who has made similar baseless statements about territories of the sovereign Republic of Armenia.
By Harut Sassounian
Publisher, The California Courier
-   Politics
Read 2569
Read more >
Read more >